HOUSEBOUND: FAIRFIELD PORTER  AND HIS CIRCLE OF POETS AND PAINTERS 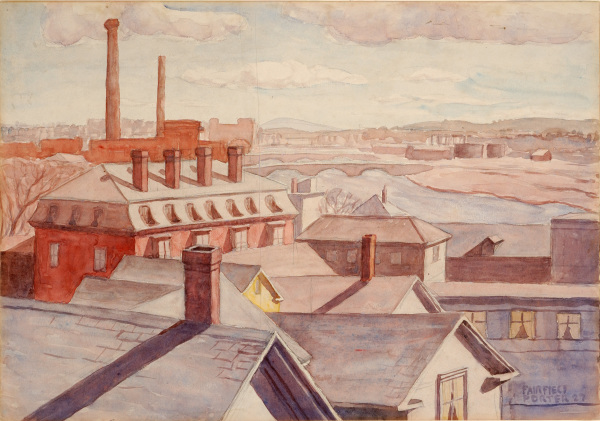 Fairfield Porter studied at Harvard College, graduating in 1928; some 20 years later, Cambridge was also the meeting place for Kenneth Koch, John Ashbery, and Frank O’Hara, three young poets whose work would come to be known as the New York School.  Both Porter and O’Hara find ample artistic inspiration in the chill of a New England morning.

It is still raining and the yellow-green cotton fruit
looks silly round a window giving out on winter trees
with only three drab leaves left. The hot plate works,
it is the sole heat on earth, and instant coffee. I
put on my warm corduroy pants, a heavy maroon sweater,
and wrap myself in my old maroon bathrobe. Just like Pasternak
in Marburg (they say Italy and France are colder,
but I’m sure that Germany’s at least as cold as this) and,
lacking the Master’s inspiration, I may freeze to death
before I can get out into the white rain. I could have left
the window closed last night? But that’s where health
comes from! His breath from the Urals, drawing me into flame
like a forgotten cigarette. Burn! this is not negligible,
being poetic, and not feeble, since it’s sponsored by
the greatest living Russian poet at incalculable cost.
Across the street there is a house under construction,
abandoned to the rain. Secretly, I shall go work on it. 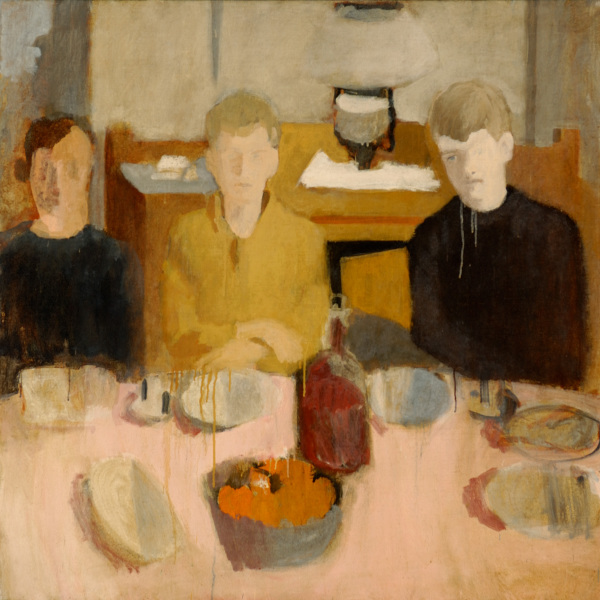 The painting of Porter’s three sons, seated at the dining room table at 49 South Main Street, is a complex portrait of his relationship with each; the artist’s poem is a further probing of these feelings.

When a loved son turns his back and goes
Down the street on a bicycle become too small
His overcoat flapping absurdly behind him
Maybe only as far as the beach
My heart is suddenly wrenched out of me
And I might as well let go and be done with it
And stay heartless, for what use could regret be
If my heart must no longer follow him?
When the grown boy turns his back and leaves
Looking forward to college or even the army
Glad to be grown up happy to be gone
Counting his new dependence as independence
I think how carelessly I have regarded him
With what little penetration I have known him
And have not listened to the pleasant wit
That marks the shrewdness of his watching mind.
In whatever new place for a short time his home
Surrounded by companions of his own age
Carrying with him no baggage of infancy
But the disappearing scars of his childish wounds
His new friends now, freshly for the first time
With contemporary easy intimacy
In a flash of insight looking in his eyes
Know the depths of his being and love him instantly. 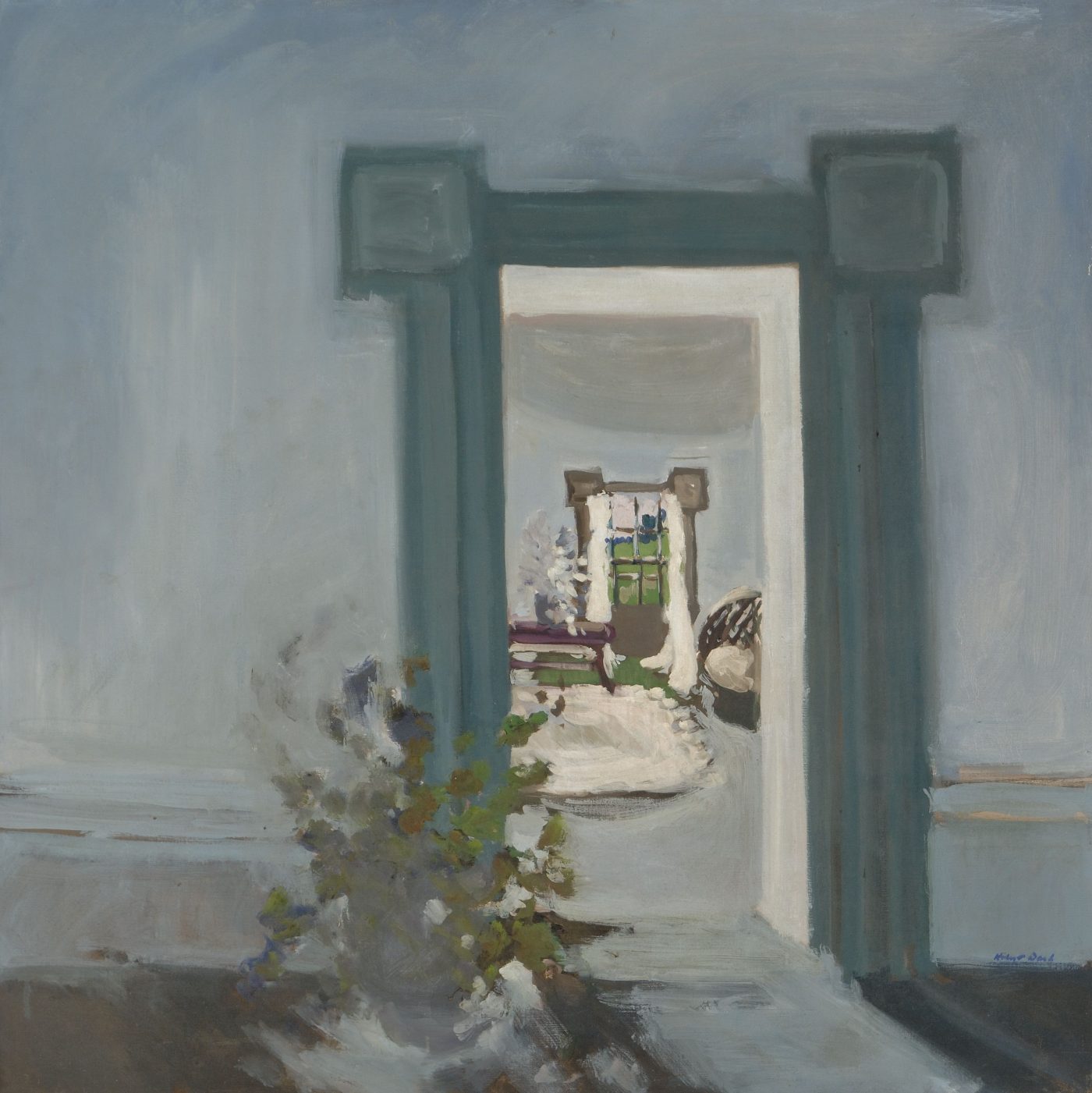 In the summer of 1955, poet Barbara Guest rented the Porter’s Southampton house for $500 when the Porter family departed for Maine. Her poem evokes the  mystery and ambiguity of an old house, also suggested by Robert Dash’s lyrical painting of the view from the Porter’s front hall into the living room.

After so many hours spent in the room,
One wonders what the room will do.
Whether speech or action will be first,
And whether the weather will be first
To begin.

Such long inaction is unnatural.
But why should it happen to you, when
Outside, the street has silver cars,
All unoccupied, equipped and ready
For departure? Even the kitchens
Are ready with pans, and the dishes for something
Heretofore unplanned. The people who pass
Whisper and stare, then say, “house.”
Why not accept the waiting and forego
The known? After all,
Occupancy is only a matter of making up
One’s mind. The silver cars are square
And the room is long.

Interruption would be different in a car.
It would come on the road, like trees and fern.
Like the flowers whose names have been learned.
Or sandwiches made in layers; the friction
Would be brief and quickly swallowed.
Not people. Not the stranger with the listening
Heart, or the girl without a mind. Not
Person. The encroachment would be barely
Visible. It would happen on a side road,
A detour, or a highway cut by mistake.
You would wipe it off like the windshield
And be ready for the next advance.

After all, this house is old.
How many people come creeping,
After the spider, upstairs. Some with bags
And some with baskets, and all going nowhere. They
Only want to settle under the roof like pigeons;
Quarter their young and prepare for the future.

But you are different. You have watched
The vanishing of the separate ghosts. You have seen,
Over the bannister, the disappearance
Even of those who tried to remain.
You should not wait for the walls
To speak. Go into the bathroom,
Turn on the faucet, and swim into the street. 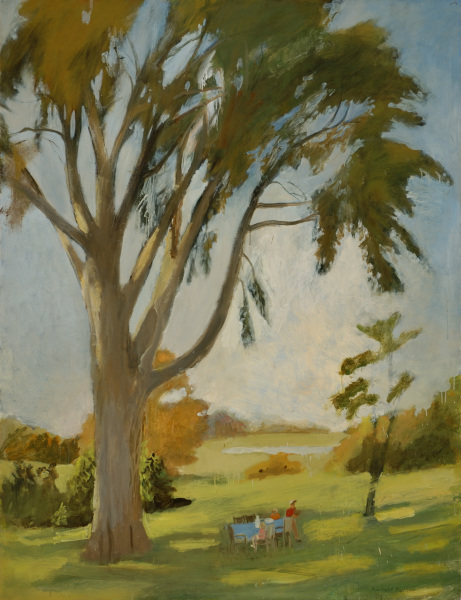 Porter shared with his poet friends an endless fascination with the ordinary moments of life. On an extended trip abroad, Koch takes a moment to celebrate one particular seaside lunch in France with detail and humor that elevates the midday meal, when it finally arrives, to an epiphany. Porter’s towering elm tree dominates a scene in the backyard of 49 South Main, dwarfing the lunch party seated beneath.

Oh I sat over a glass of red wine
And you came out dressed in a paper cup.
An ant-fly was eating hay-mire in the chair-rafters
And large white birds flew in and dropped edible animals to the ground.
If they had been gulls it would have been garbage
Or fish. We have to be fair to the animal kingdom,
But if I do not wish to be fair, if I wish to eat lunch
Undisturbed –? The light of day shines down. The world continues.

We stood in the little hutment in Biarritz
Waiting for lunch, and your hand clasped mine
And I felt it was sweaty;
And then lunch was served,
Like the bouquet of an enchantress.
Oh the green whites and red yellows
And purple whites of lunch! 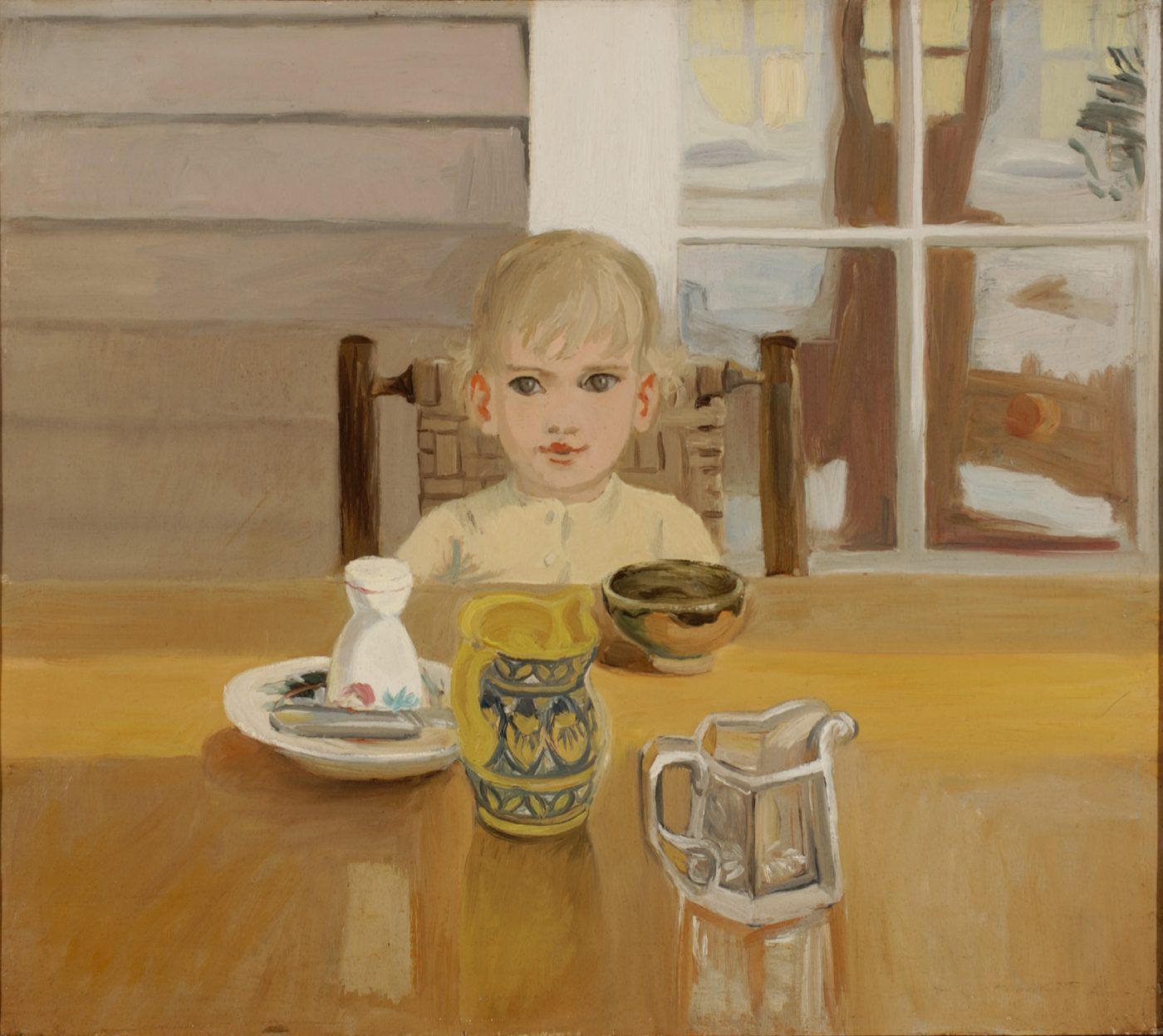 On his many visits with the Porter family, in Southampton and on Great Spruce Head, O’Hara and the Porters’ oldest daughter Katherine developed a special bond through their love of writing. O’Hara later published this poem as a collaboration between himself and six-year-old Katie.

They say I mope too much
but really I’m loudly dancing.
I eat paper. It’s good for my bones.
I play the piano pedal. I dance,
I am never quiet, I mean silent.
Some day I’ll love Frank O’Hara.
I think I’ll be alone for a little while. 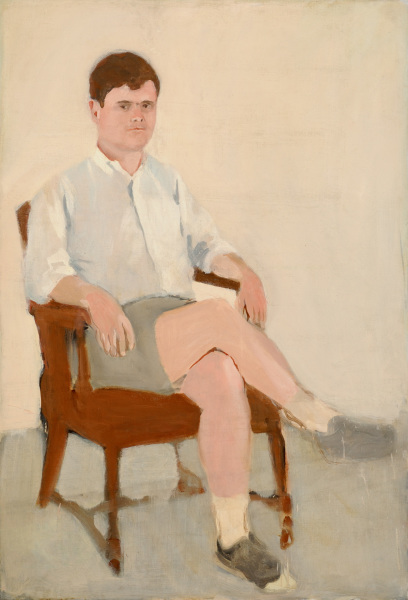 In the introduction to a collection of Fairfield Porter’s poetry (published posthumously in 1985), his friend John Ashbery recalls that Porter’s poetry “mattered a lot to him. . . and he indeed wondered what various friends thought of his verses, but doesn’t seem too worried about it.” In this musing, Porter seems to delight in describing the quirks and traits of his circle of friends. 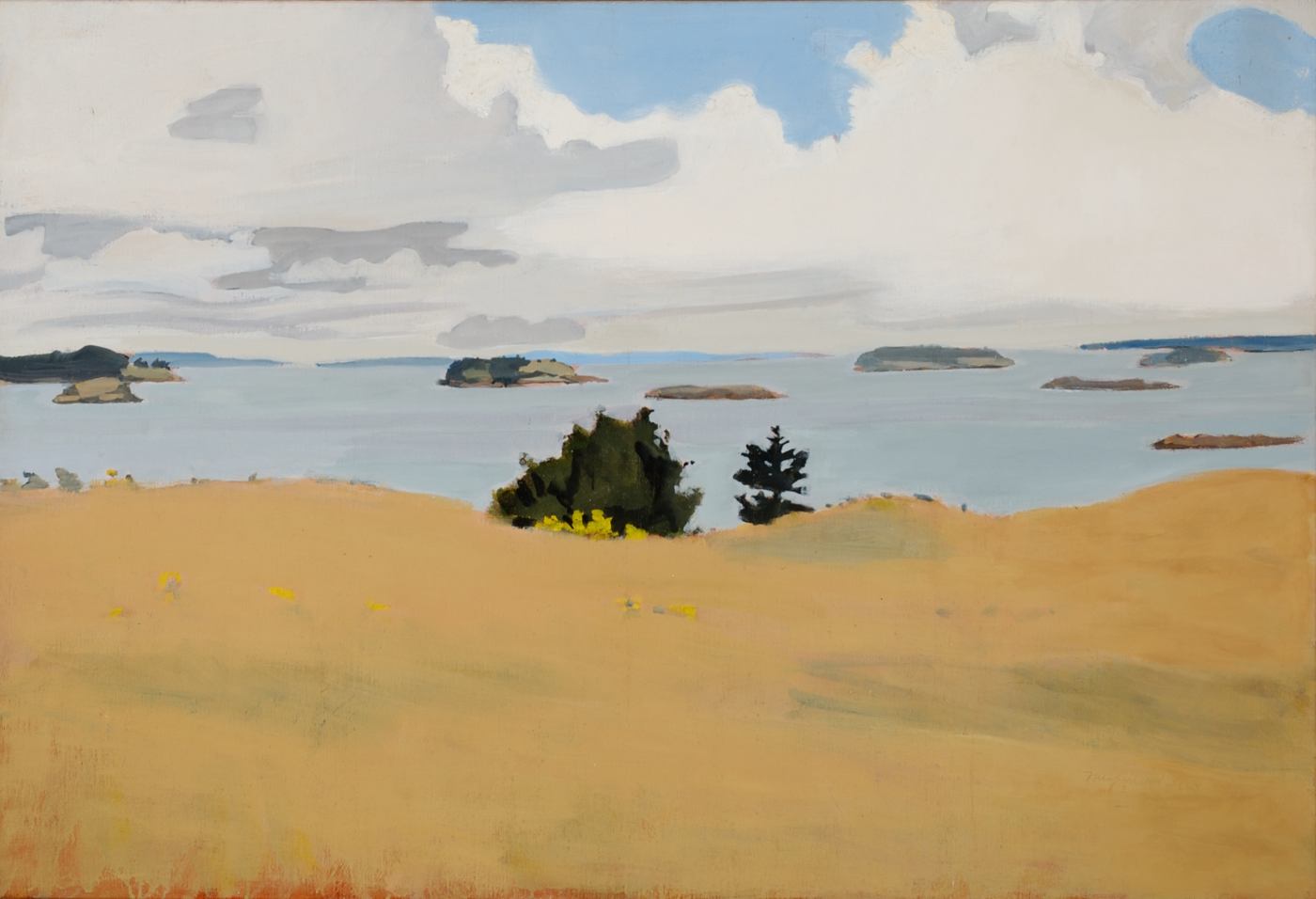 The sestina  is surely one of the most complex ways of composing a poem but Porter and the New York School poets took delight in the intricate challenge of the form.  Here Ashbery investigates the making of a work of  art.

Sitting between the sea and the buildings
He enjoyed painting the sea’s portrait.
But just as children imagine a prayer
Is merely silence, he expected his subject
To rush up the sand, and, seizing a brush,
Plaster its own portrait on the canvas.

So there was never any paint on his canvas
Until the people who lived in the buildings
Put him to work: “Try using the brush
As a means to an end. Select, for a portrait,
Something less angry and large, and more subject
To a painter’s moods, or, perhaps, to a prayer.”

How could he explain to them his prayer
That nature, not art, might usurp the canvas?
He chose his wife for a new subject,
Making her vast, like ruined buildings,
As if, forgetting itself, the portrait
Had expressed itself without a brush.

Slightly encouraged, he dipped his brush
In the sea, murmuring a heartfelt prayer:
“My soul, when I paint this next portrait
Let it be you who wrecks the canvas.”
The news spread like wildfire through the buildings:
He had gone back to the sea for his subject.

Imagine a painter crucified by his subject!
Too exhausted even to lift his brush,
He provoked some artists leaning from the buildings
To malicious mirth: “We haven’t a prayer
Now, of putting ourselves on canvas,
Or getting the sea to sit for a portrait!”

Others declared it a self-portrait.
Finally all indications of a subject
Began to fade, leaving the canvas
Perfectly white. He put down the brush.
At once a howl, that was also a prayer,
Arose from the overcrowded buildings.

They tossed him, the portrait, from the tallest of the buildings;
And the sea devoured the canvas and the brush
As though his subject had decided to remain a prayer. 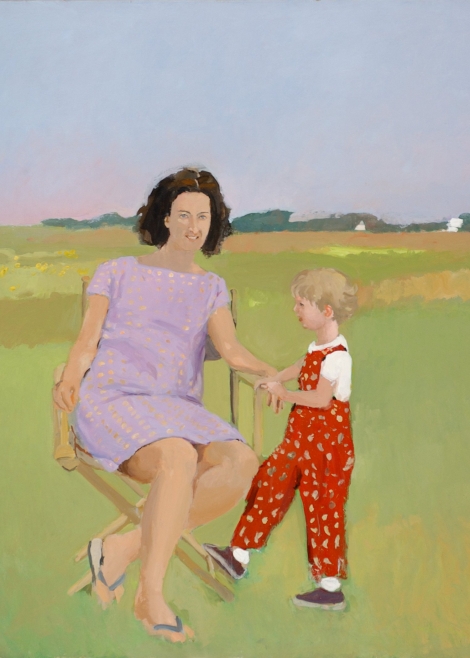 When James, most often called Jimmy, Schuyler first became friendly with fellow poets Ashbery, Koch, and O’Hara in the early 1950s, Koch later recalled that Schuyler “passed one test for being a poet of the New York School by almost instantly going crazy for Jane Freilicher and all her work.” In this poem to Freilicher, Schuyler closely identifies the artist with the cycles of nature.

May drew in its breath and smelled June’s roses
when Jane put roses on the sill.  The sky,
in blue for elms, planted its lightest kiss,
the kind called a butterfly, on bricks fresh
from their kiln as the roses from their bush.
Summer went by in green, then two new leaves
stood on the avocado stem.  The sky
darkened the color of Jane’s eyes and snow
wrote her name in white.  Such wet snow, that stuck
to the underside of curled iron and stone.
Jane, among fresh lilacs in her room, watched
December, in brown with furs, turn on lights
until the city trembled like a tree
in which wind moves.  And it was all for her. 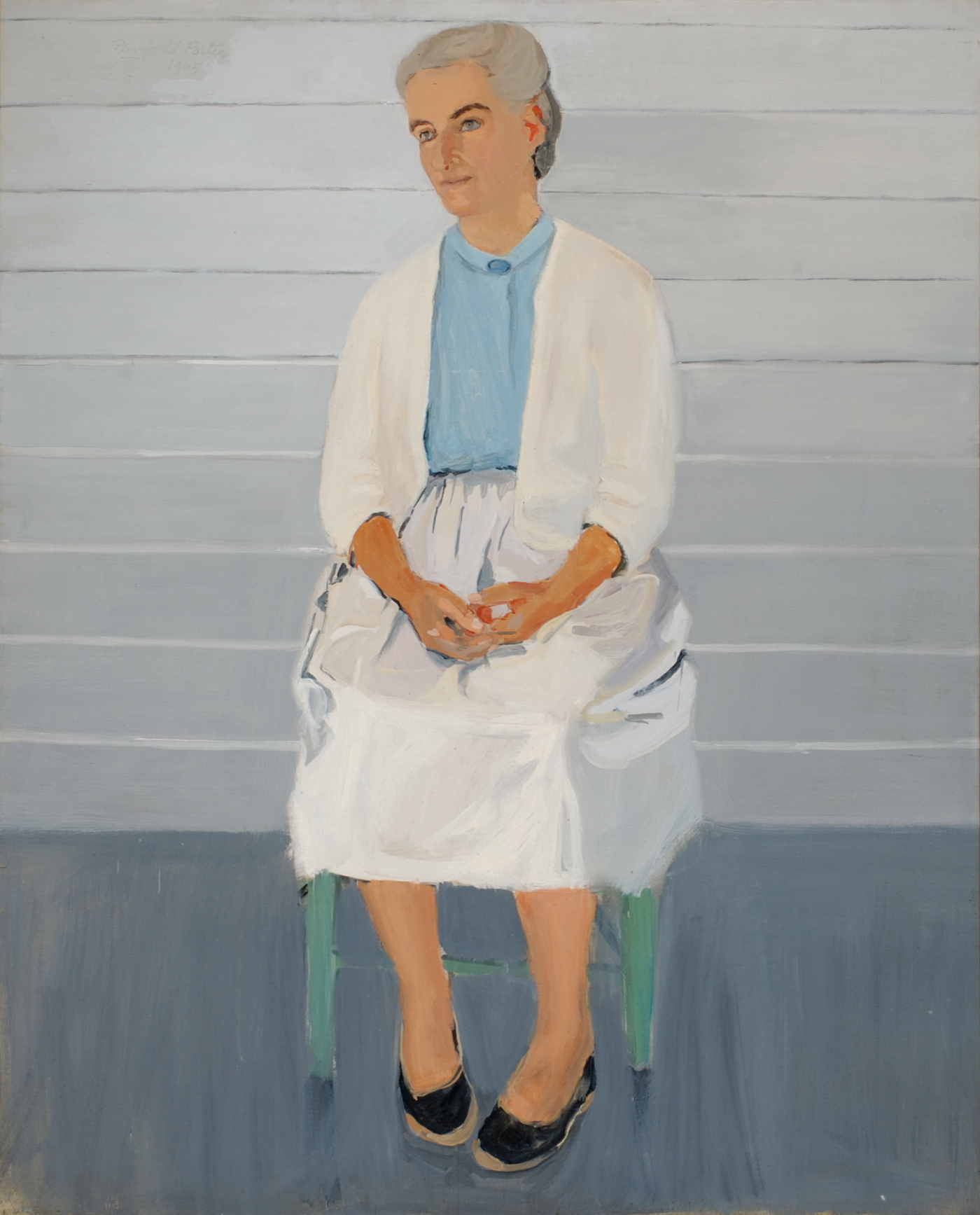 Porter painted his wife countless times during their forty year marriage—here on the porch of the house in Great Spruce Head where her figure almost merges with the weathered gray clapboard exterior. Anne Porter’s poem recounts a trip that she and Fairfield made shortly before their marriage and her understanding, from that moment on, of the unassailable bond between them.

When human, quarrelsome
But stronger
Than death or anger
A love began.