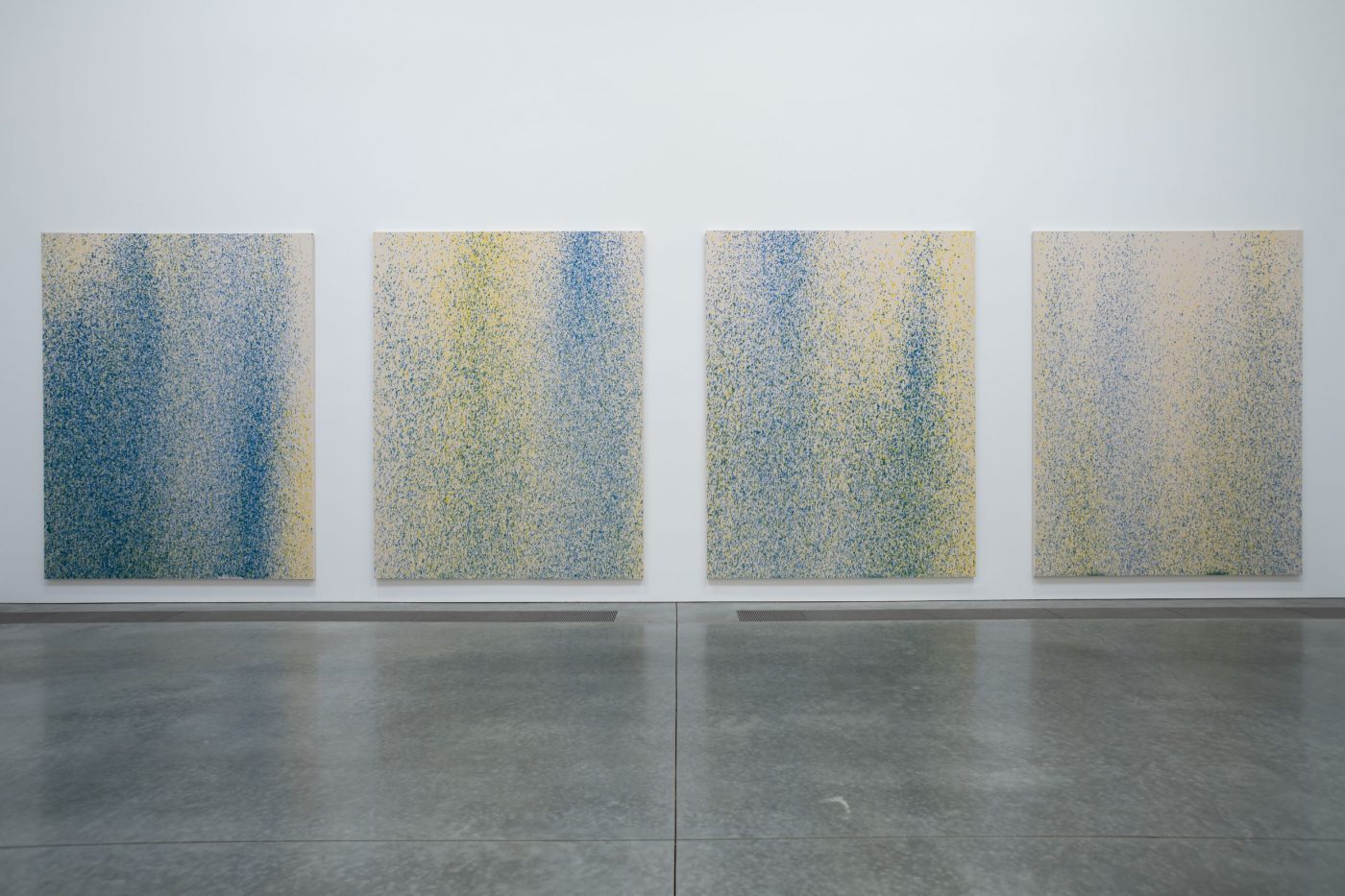 For an artist as young as Lucien Smith (b. 1989), it may seem odd to hear him use the word “nostalgia” when speaking about paintings from 2013. He had recently finished his studies at the Cooper Union, and his paintings, made by filling an empty fire extinguisher with paint and spraying the canvas, became widely known soon after his 2011 graduation. What appealed to the artist was the way he was able to replicate a natural process—rain—with a manmade tool. For the first Rain Paintings series Murmur of the Heart, the artist used blue and yellow paint, but after this initial investigations he began to use a monochromatic approach, perhaps taking a cue from the traditional depiction of rain in Japanese woodblock prints.

With a feeling of having not quite finished that initial exploration and finding himself with the offer of a Southampton house surrounded by beautiful gardens in the summer of 2013, Smith returned to the beginning of the series and once again used blue and yellow. Working in the traditional artist’s method en plein air, Smith erected a plastic-sealed “Conestoga wagon” in the garden to contain the spraying. By placing himself in nature, the artist embarked on a refinement of the process that achieved a subtlety and a resolution, and, he sensed, brought closure to the series.

Smith is an artist who grounds his work in the historical context of making art. One might assume that a precedent for these paintings and the immersive installation is Monet’s Water Lilies. The artist’s response was no, not so much; he was more inspired by Julian Schnabel’s open-air studio, Andy Warhol’s oxidation paintings, and Hans Hartung’s use of a garden sprayer to apply paint. Smith, who now calls Montauk home base, makes connections with his artistic forebears, and it’s no surprise that artists long associated with Montauk, like Schnabel and Warhol, loom large in that lineage.

The ten works on view here from 2013 have never been shown as a group. The artist waited for the right moment, and placed these paintings knowing that when they did reappear, they might look radically different to him. To say that the paintings evolved from the earlier ones is only to say that the artist himself has evolved.