Ticket purchasers at the Sponsor level and above will be invited for a reception and guided tours through our Field of Dreams sculpture exhibition with special guest Mary Margaret Jones of Hargreaves Jones, Landscape Architects, who worked with the Parrish on the siting of the sculptures and activation of the meadow. 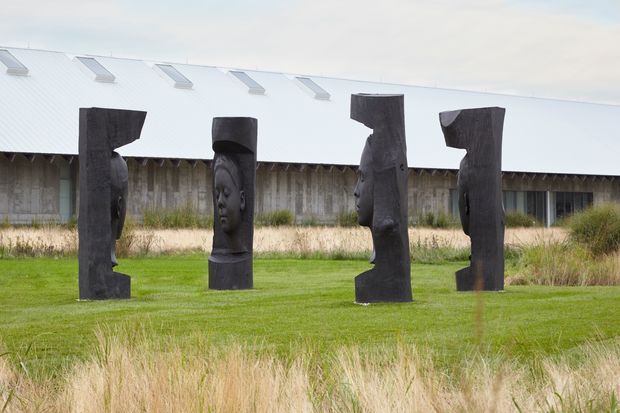 This half-acre property has grown and changed with the family over the past 12 years. Ongoing work has included an original reframing and planting of the property, followed by new gardens, plantings, and changes to the parking configuration. The latest property addition included the construction of a pool area for the family’s three small children. 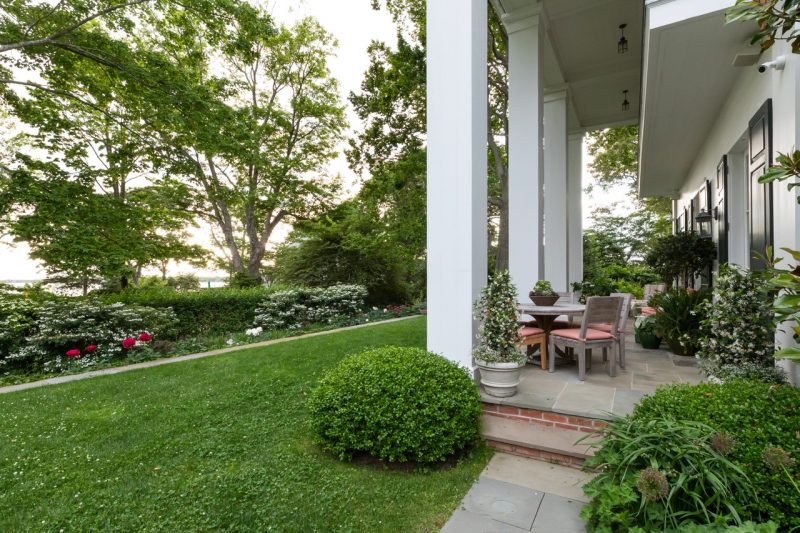 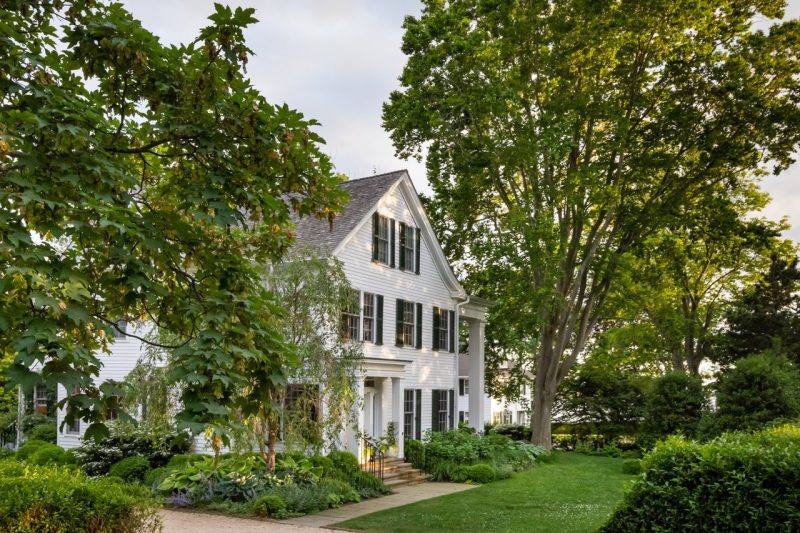 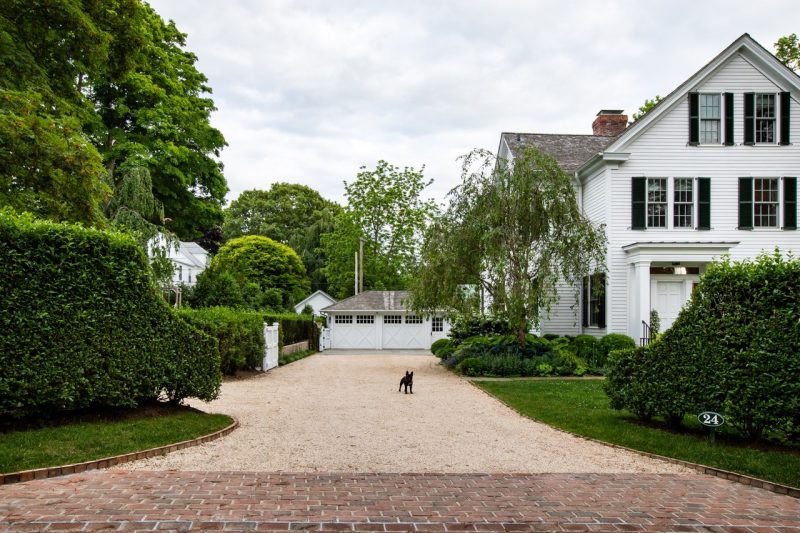 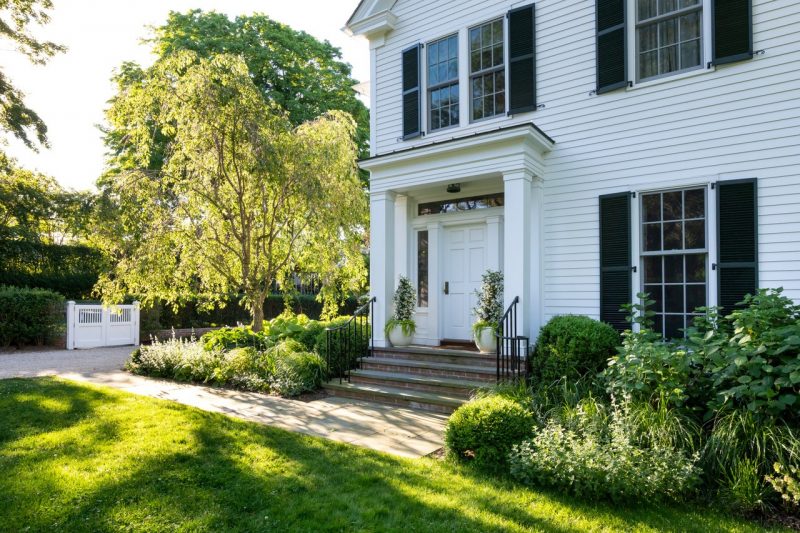 The only client directive for this landscape was ‘not one blade of turfgrass on the property”. Given the northeast exposure to open-water Gardiners Bay, and Shelter Island’s water sensitivities, we built a beach from the waterside of the house forward – three large undulating dunes covered with drought-tolerant Blue Lyme and Cape American beachgrass, retaining paths through the grasses with root-barriers installed 3’ below grade. We punctuated the dune area with Hollywood junipers and Japanese black pines, bayberry, and rosa rugosa.

To cover all surfaces on the 1.25 acres, we used crushed quahog shells, crushed gravel, sand, and long-leaf pine straw in various areas. Additionally, the property was on the lowest point on Gardiners Bay Drive and massive amounts of stormwater ran through the property and out into the bay. We slowed down the water flow with plants, a dry well and then created a large depression and planted a willow to collect the majority of all rainwater, thereby preventing runoff into the sea.

Over the past 10 years the garden has been amended as plants grew bigger: for example the entrance olive allee previously had large drifts of Prairie dropseed grasses – now only a few drifts remain at the borders as they became shaded out by the olives. We then transitioned to all clam shells in this area. The exposed property has performed admirably throughout numerous storms, the most extreme being Sandy, where we only lost sand over the bulkheads and the circular concrete pavers were scattered about by the storm surge. 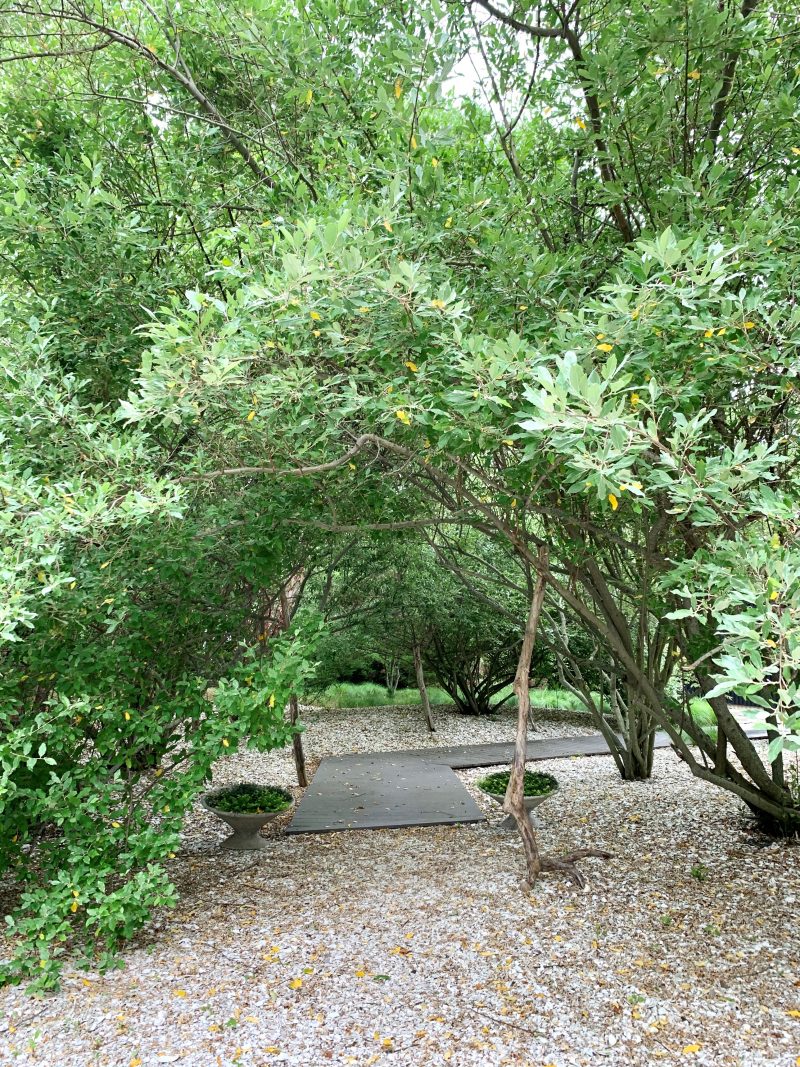 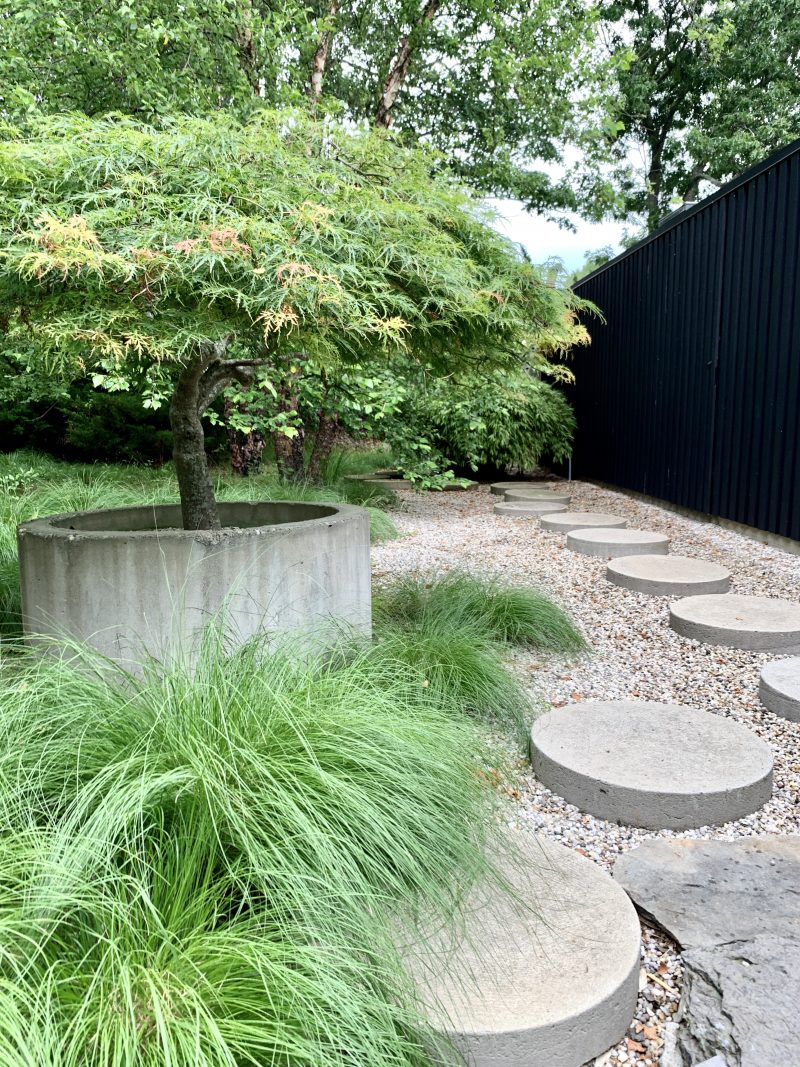 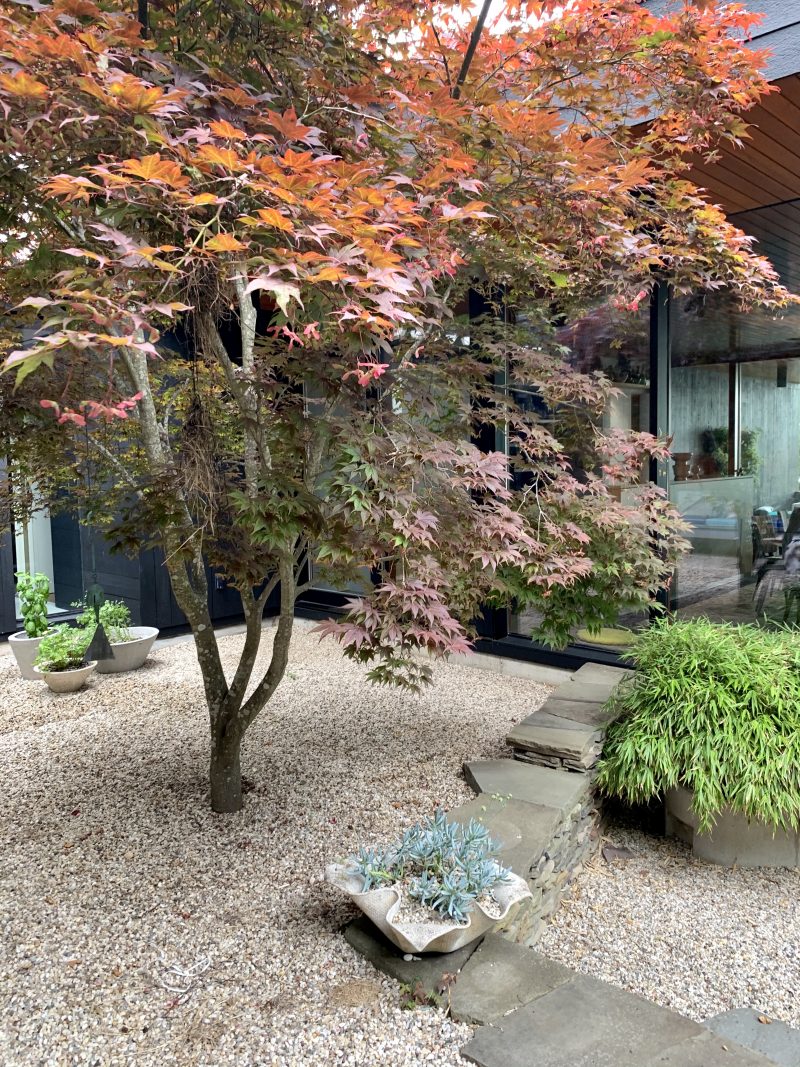 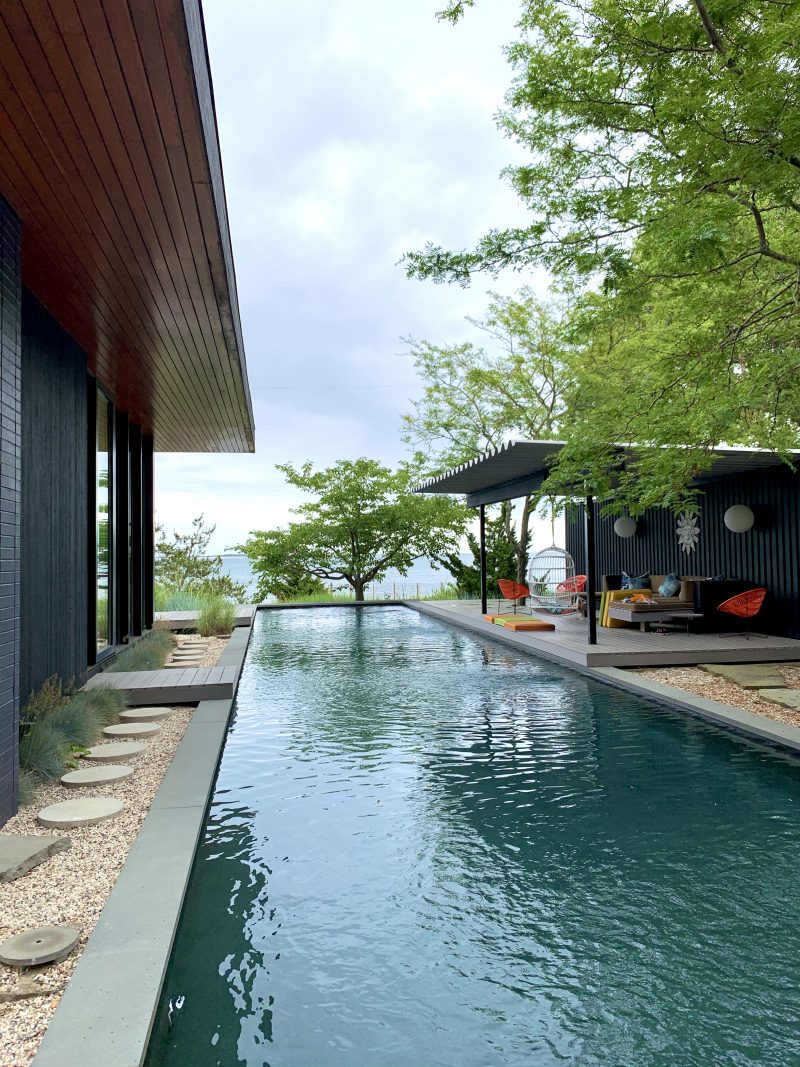 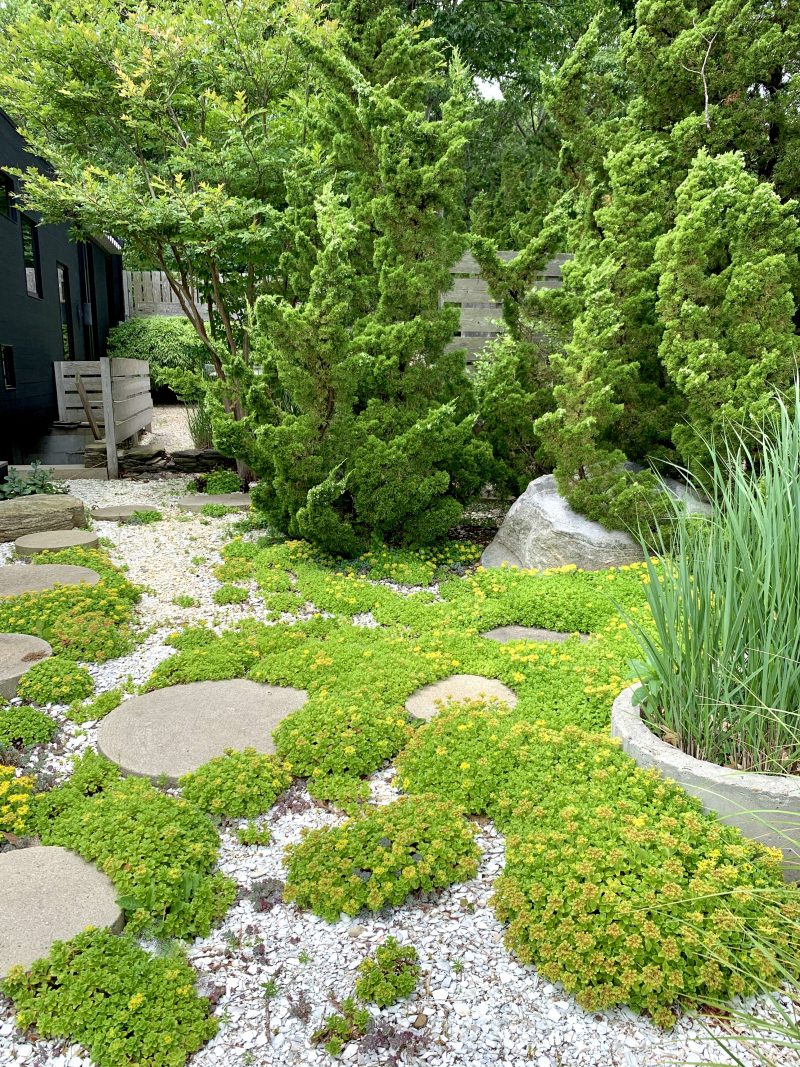 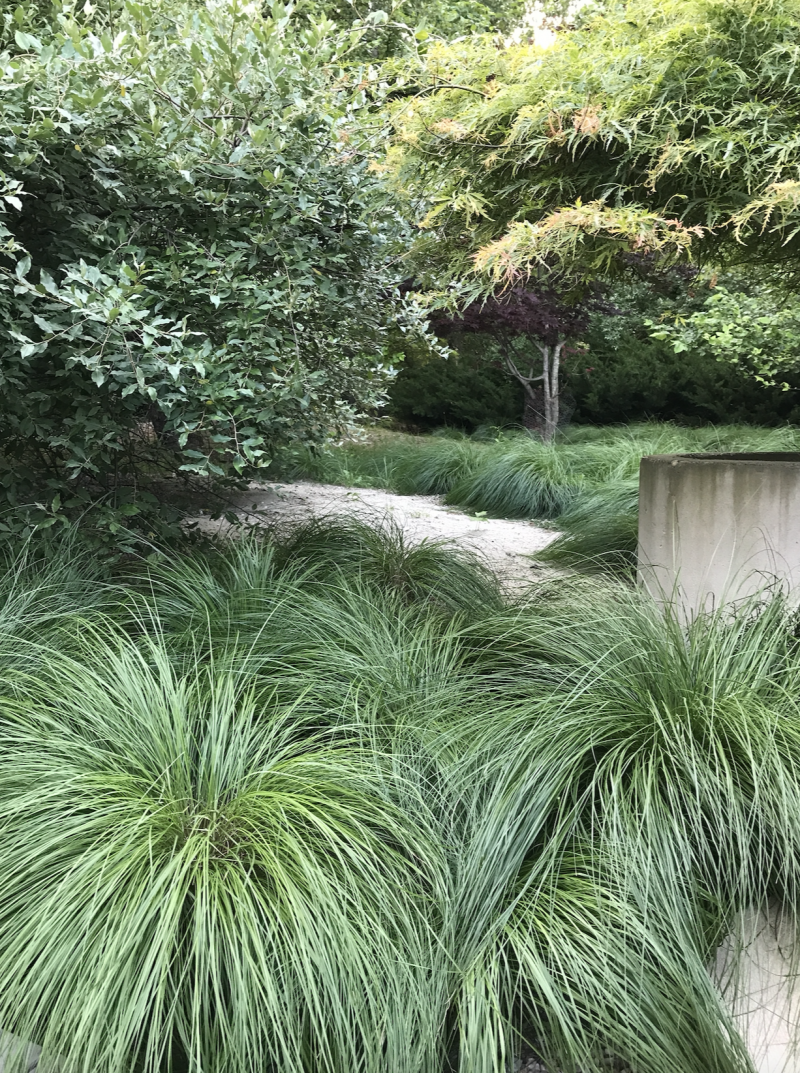 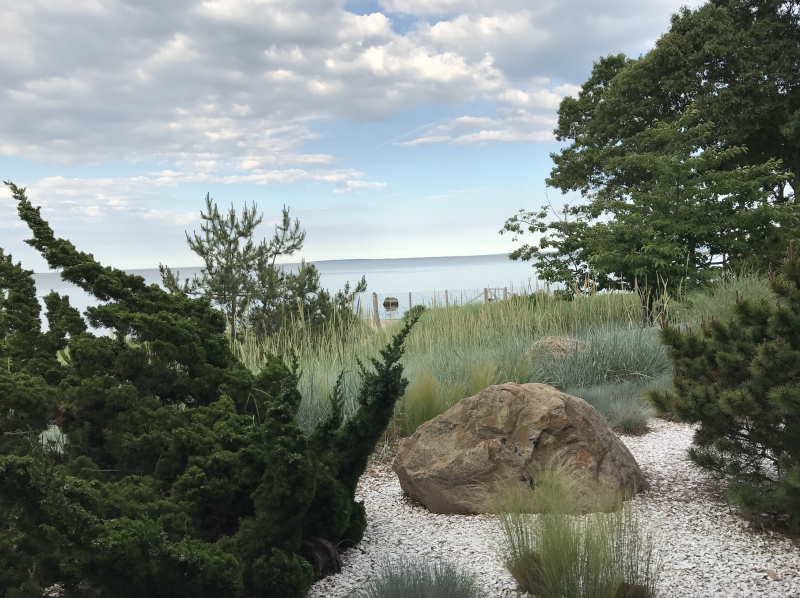 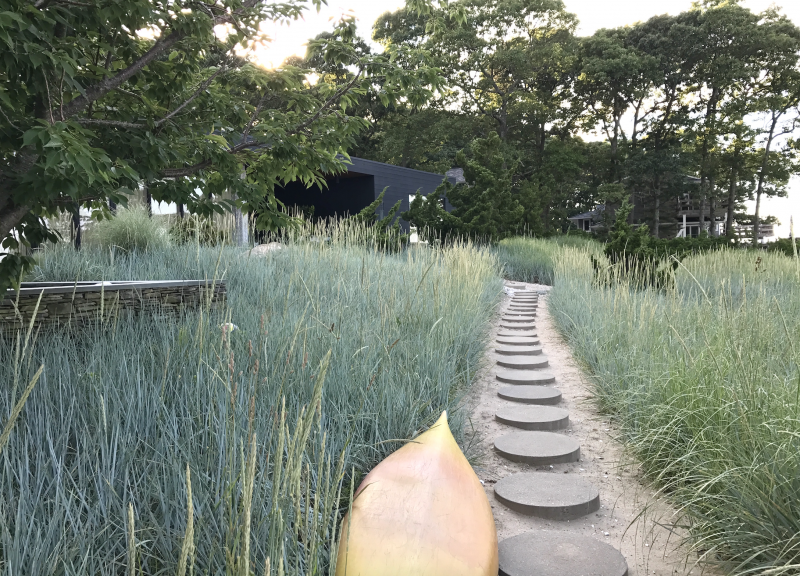 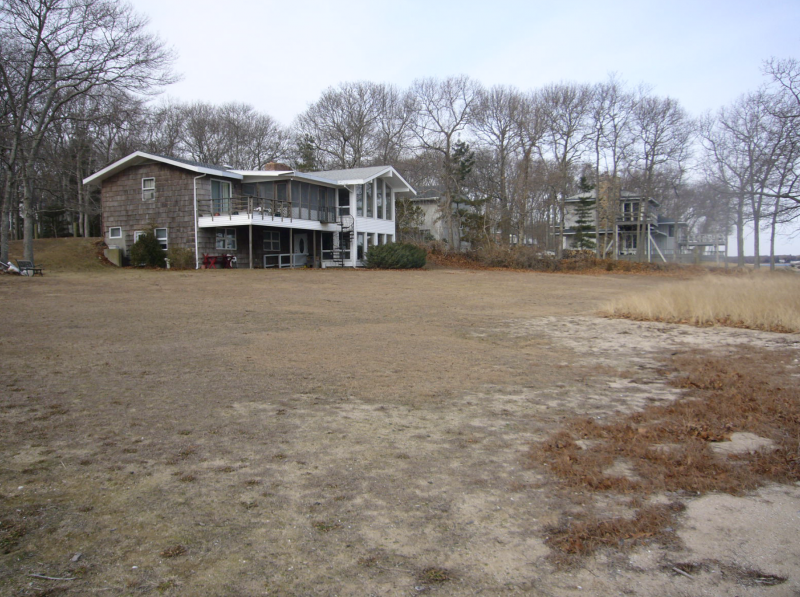 This garden, located on 1.34 waterfront acres, has been transformed over time from a former bachelor pad into a family refuge. Farm Landscape Design was brought in during house renovations and has been actively involved in the evolution of the plantings and gardens. The latest intervention—removal of the lawn by Coecles Harbor and the installation of a meadow—has become a vibrant backdrop to the water. 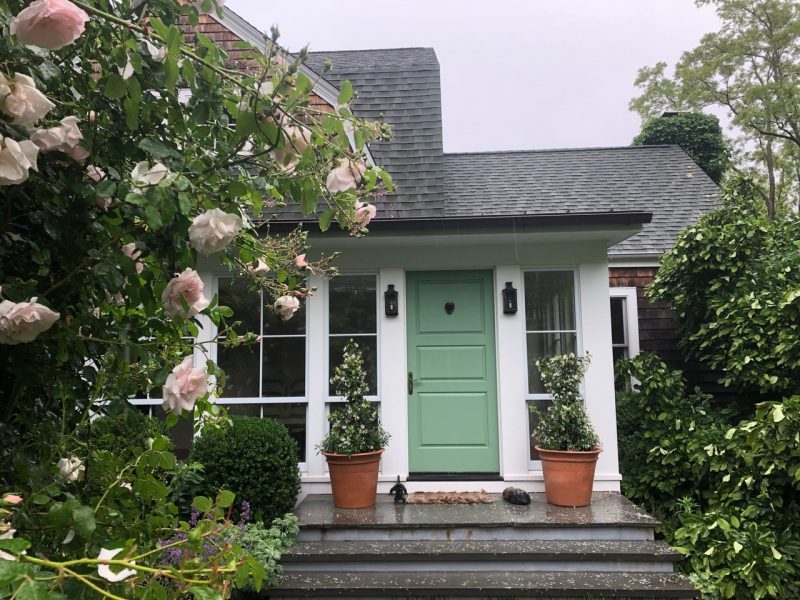 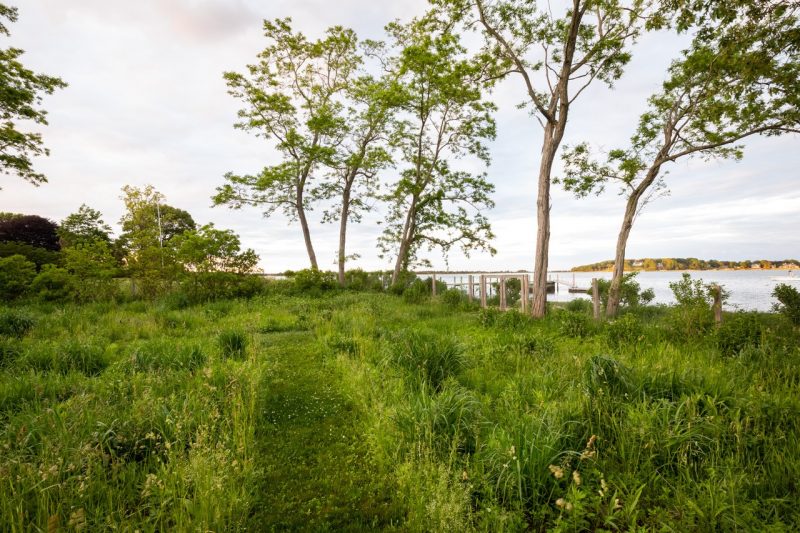 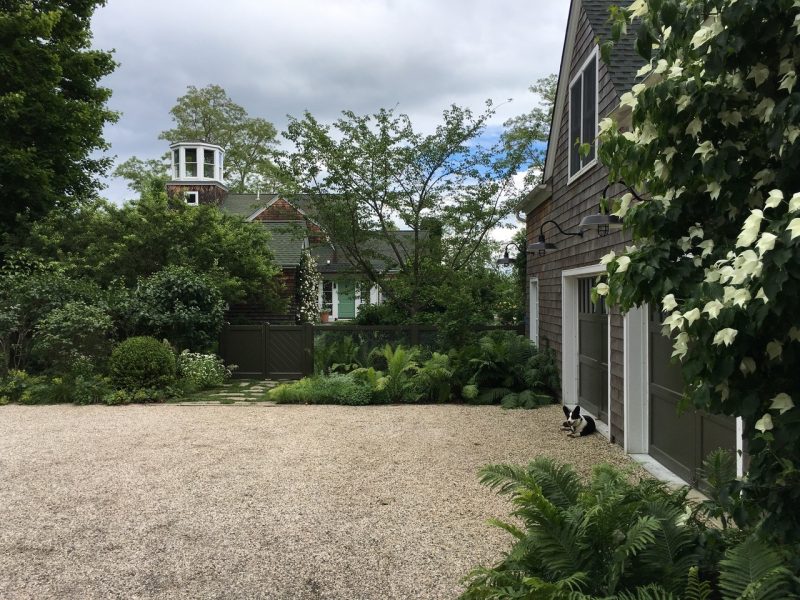 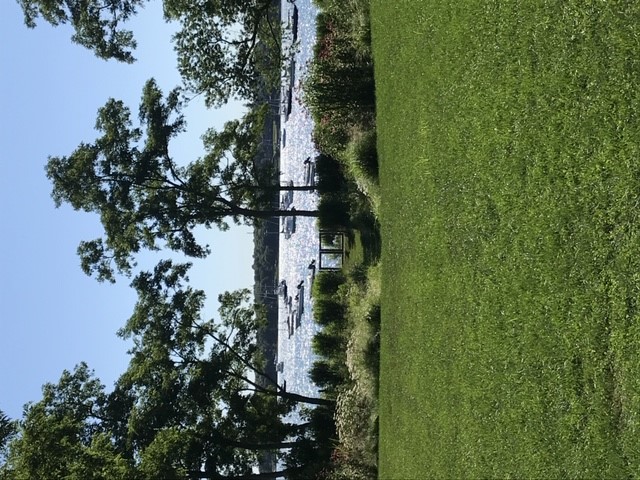 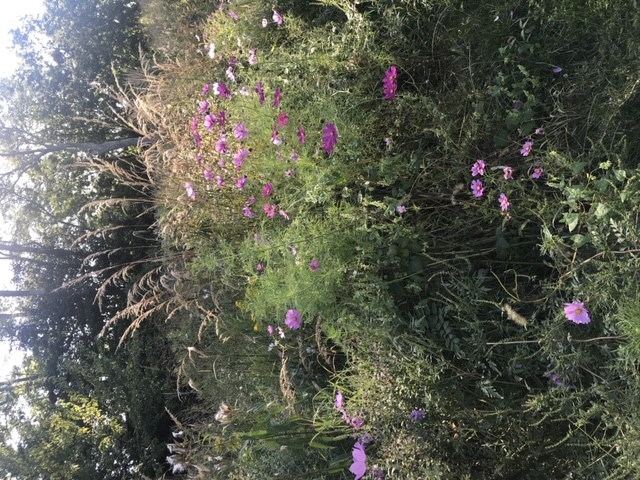 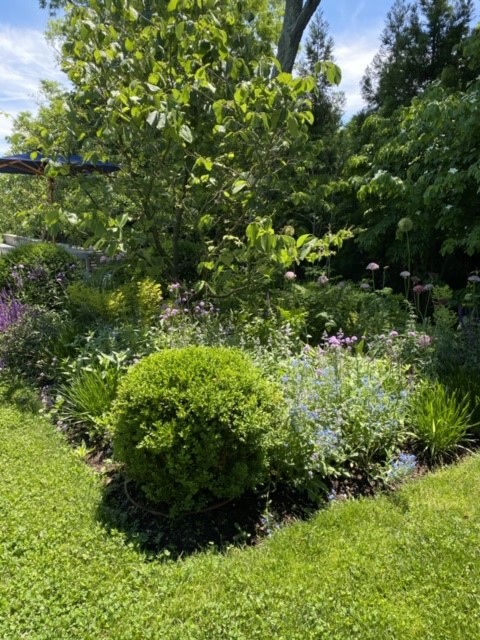 The gardens were installed in 2017 with sensitivities to an extremely windy waterfront site – primarily drought- and aerosol salt-tolerant material was selected, including zoysia sod from Maryland. Having learned lessons from Hurricane Sandy in 2012, the best performing plants proved to be Hollywood and seagreen junipers, pink muhlenberiga, pannicum and pennisetum, bayberry, rosa virginiana and rugosa – so these were among selections for this challenging site. As you will see, the recent storm Isaias hammered this site so relentlessly with airborne salt that much of the plantings in some areas are burned – and are hopeful that all plants will be fine next year. Additionally, the designer installed a sandy beach and sand paths through the required vegetative buffer of Cape American beach grass. Due to the low water table, all irrigation is provided by an underground cistern – in addition to water deliveries, the property collects rainwater off the tennis court and from all condensate from mechanical systems. 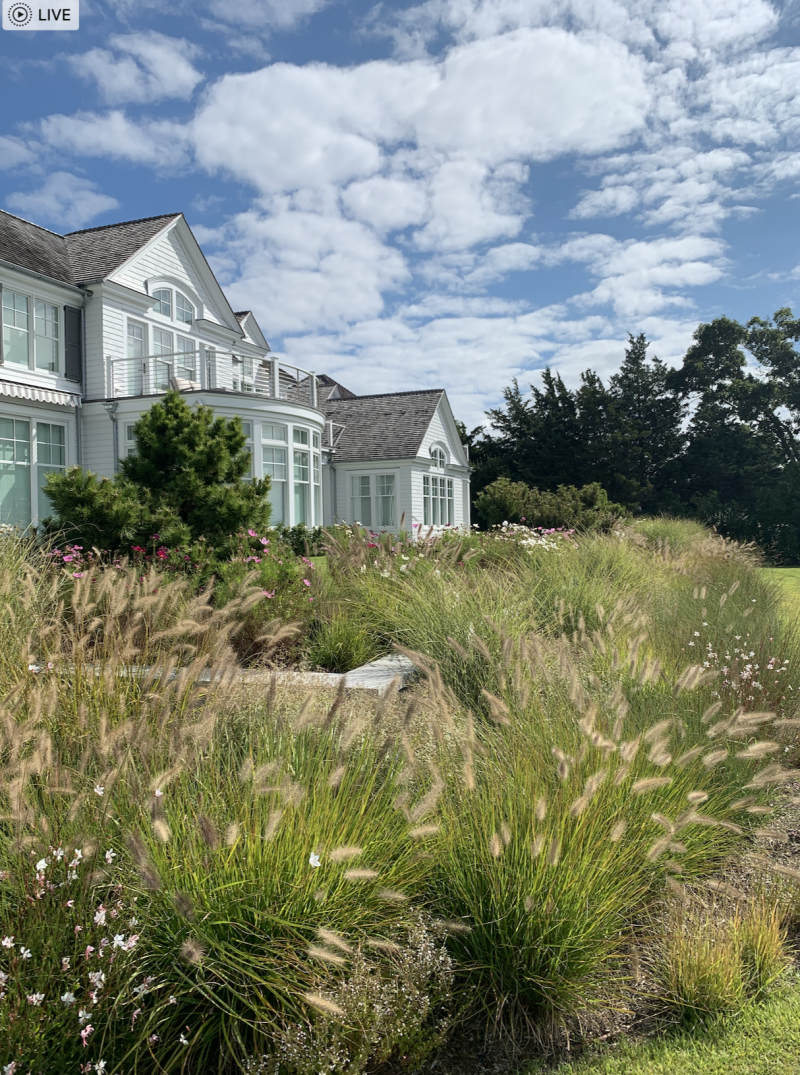 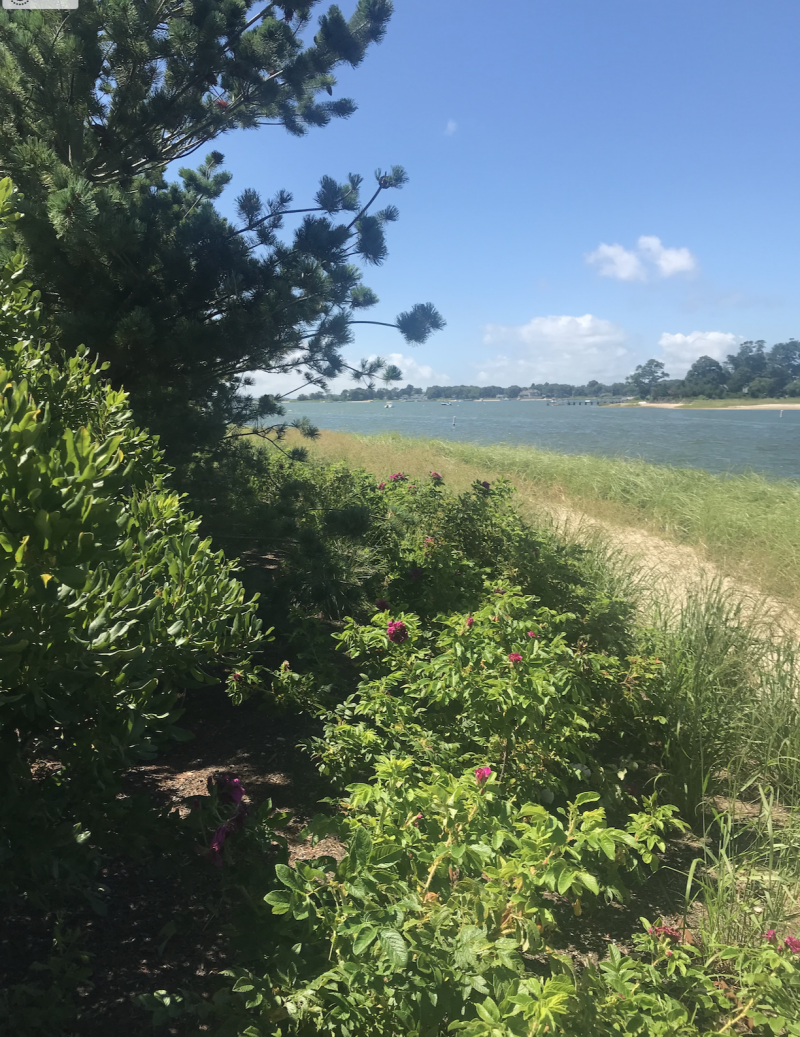 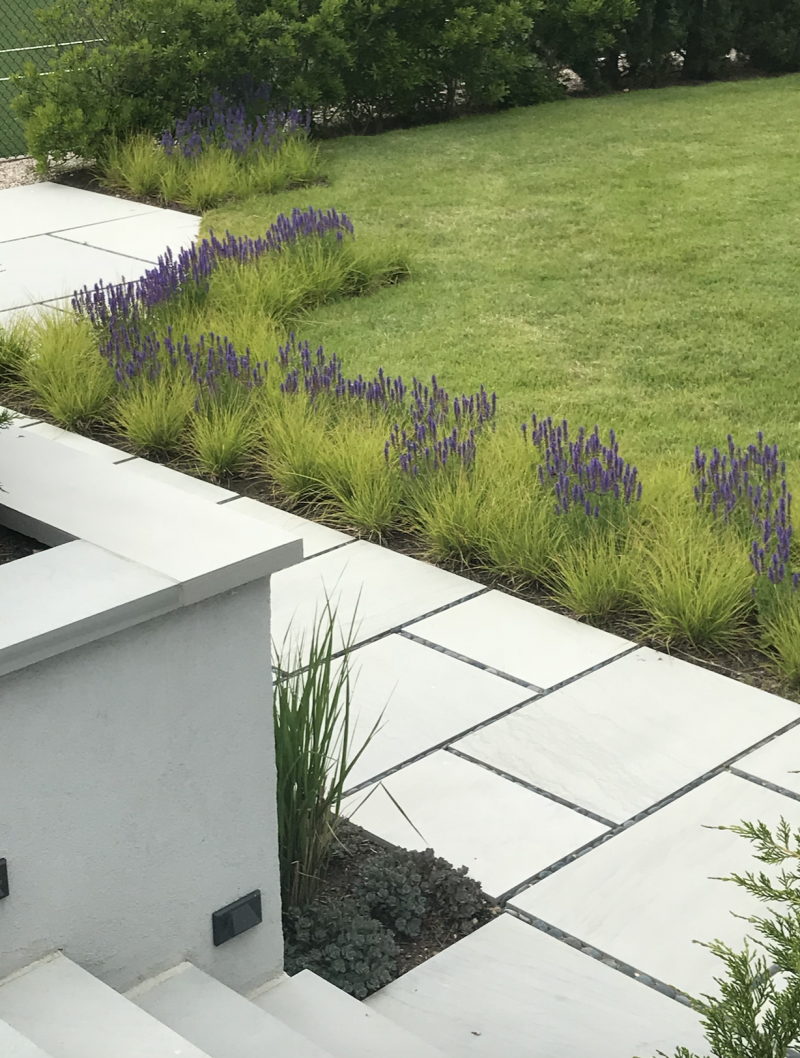 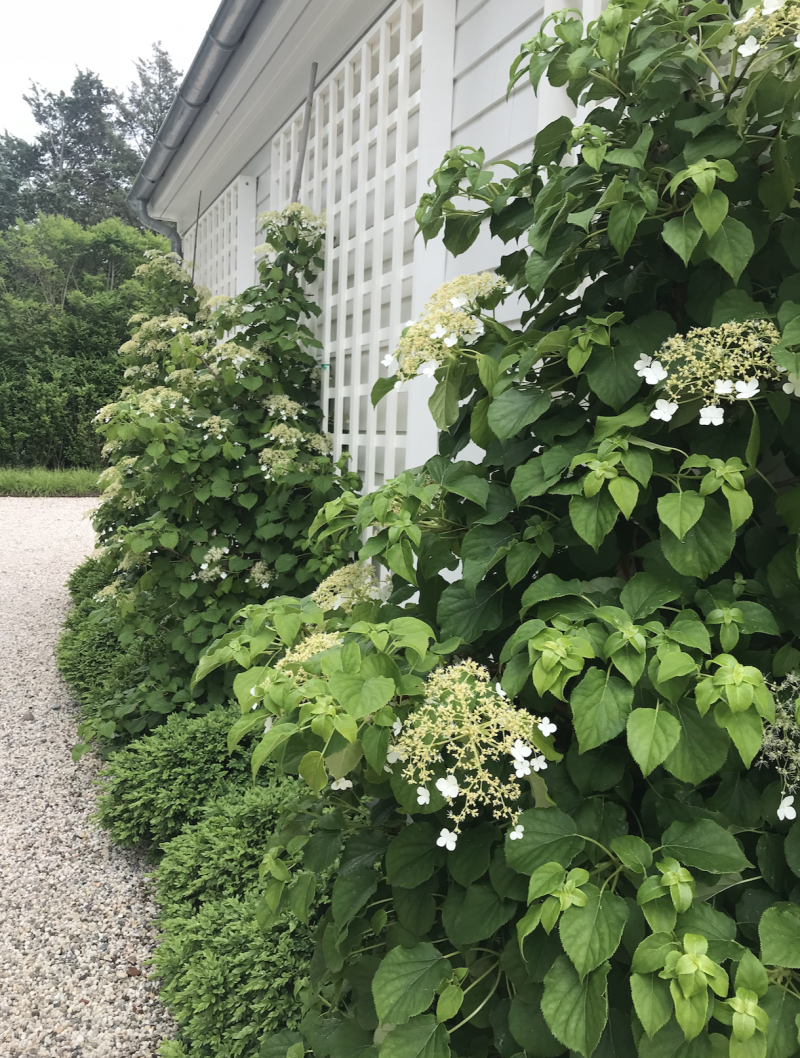 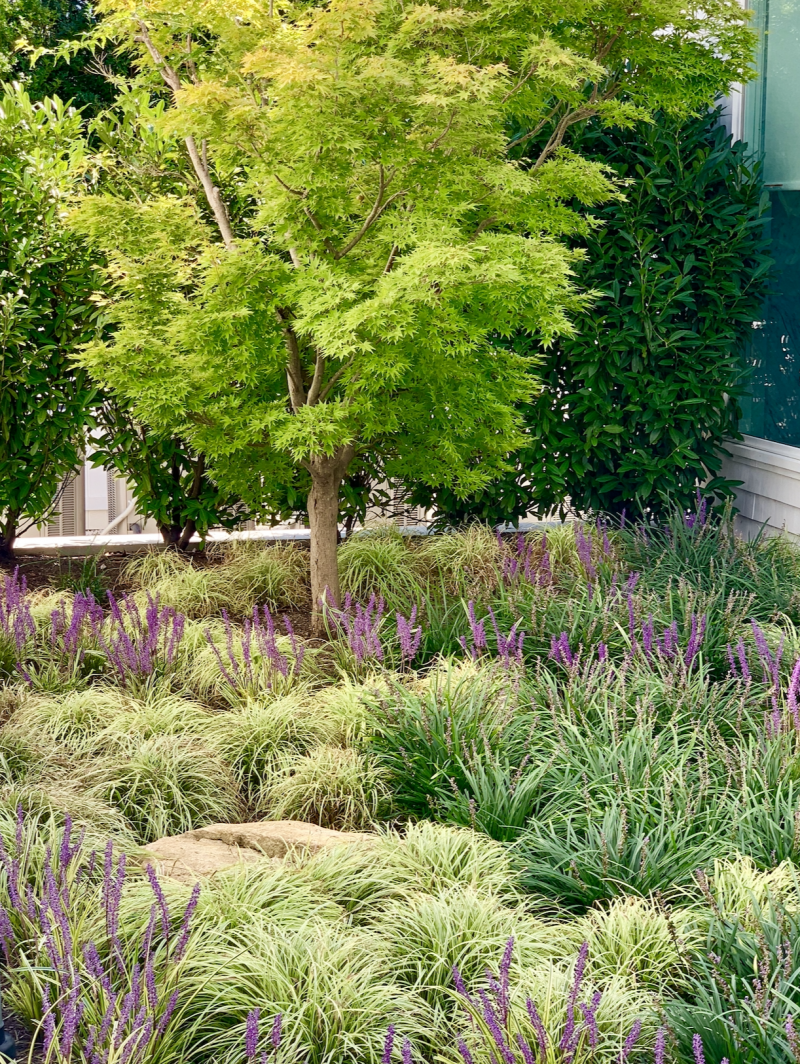 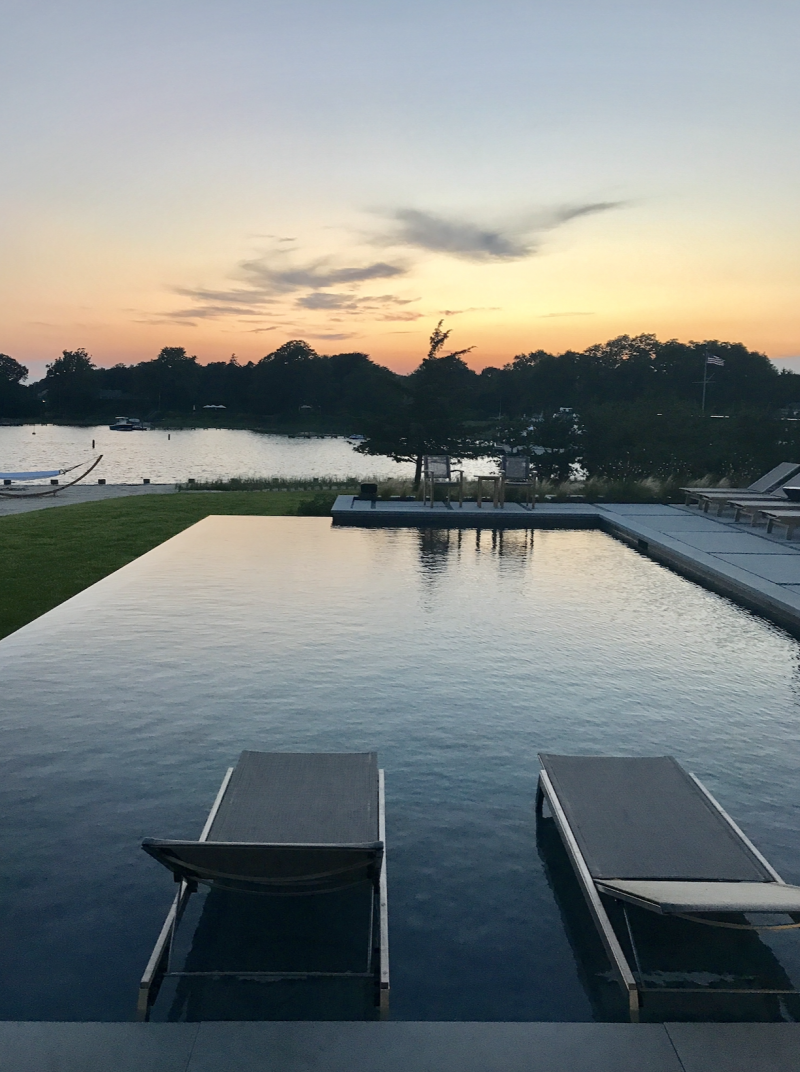 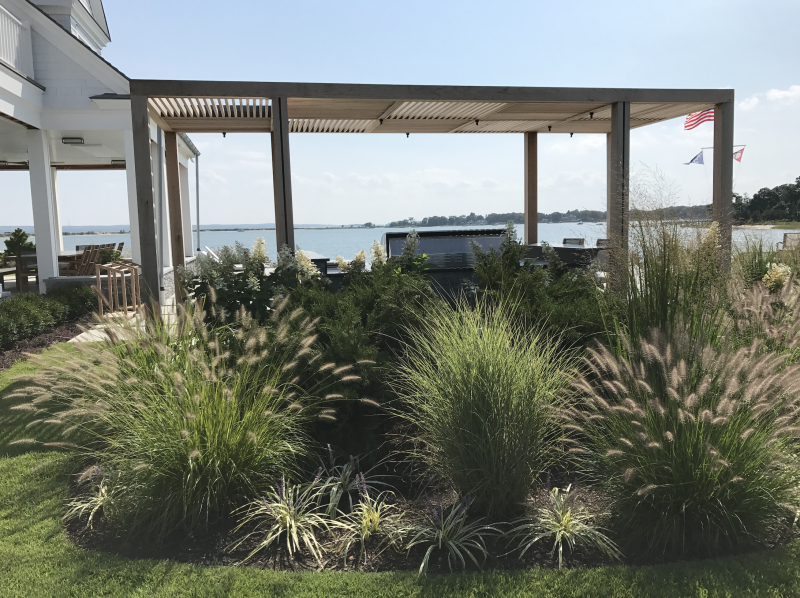 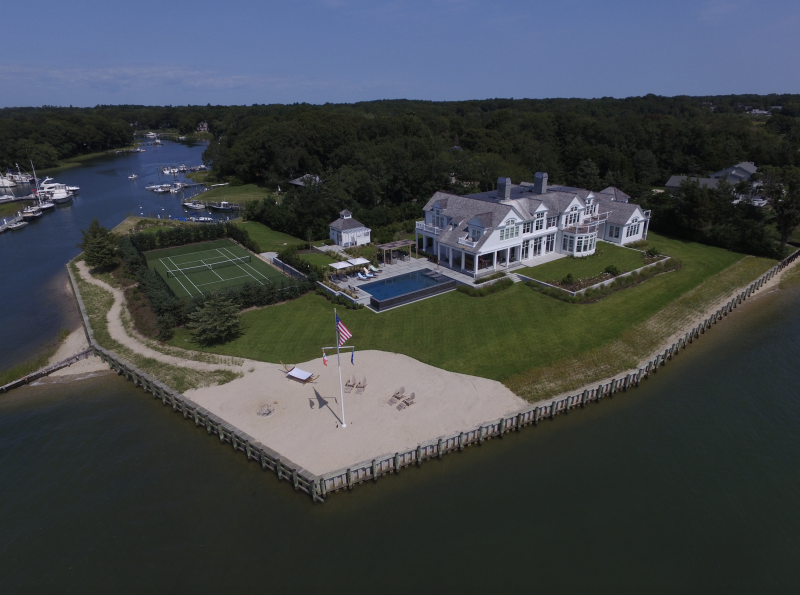 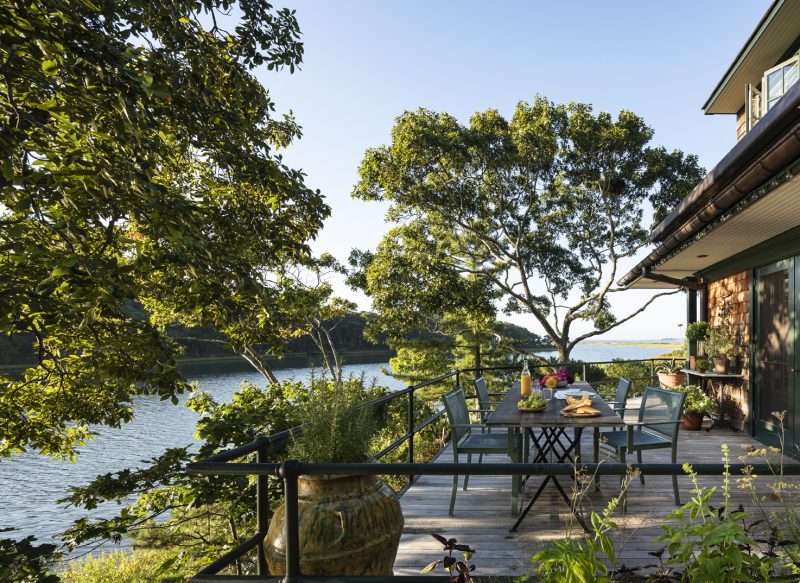 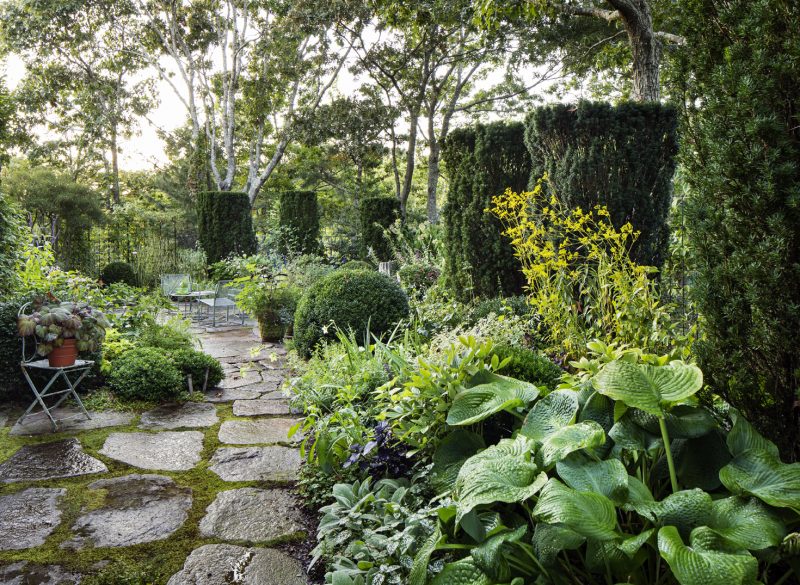 This entire property, situated over three acres, was renovated to seamlessly join house, bluff, and woods with the exception of the pool. Major design changes included incorporating a rounded parking court, creating pathways into the woods, introducing ferns, and understory plants, and adding a white garden and additional plantings around the bluff. The couple is dedicated to the landscape’s future health and hopes to further develop the woodland area over time, with the hope of creating a pond, seating area, and further refinement of the understory plantings.

RETURN TO THE LANDSCAPE PLEASURES WEBPAGE